After grieving from the loss of his polar partner, the last polar bear in Africa died Wednesday at a zoo in Johannesburg.

The Johannesburg Zoo euthanized the 28 year old wang who was suffering from chronic arthritis and liver failure. 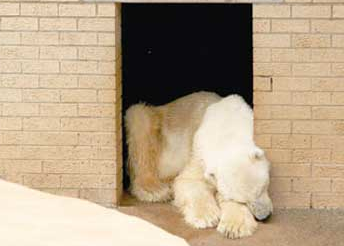 He lost his polar partner in January 2014 who was taken by a heart  attack. Now walking around listless and refusing food.

In an attempt to help him minimize the pain of his heartbreak and in the hope he could eat and improve his health, he was given special treats and showered with toys.

On Valentine's Day 2014, Wang was given a box filled with fruit and meat, and highlighted with love hearts and a note that said, "We Love You Wang!"

Polar bear reproduction is stimulated by cold weather, the bears Wang and GeeBee did not breed because they where raised in warm captivity since they where cubs.

According to the zoo there are no plans to replace the animals.

Other Articles Of Interest:
The Last Polar Bear In Africa Dies
Finding A New Earth
300: Rise of an Empire
Two-Headed Dolphin Found On Turkish Beach
Robin Williams Dead
Old Skeleton Rediscovered
The Best Zoos In The World
Battlefield Hardline. Newest in the Battlefield Franchise.
Solar Roadways
Hubble Telescope Finds A 9.6 Billion Year Old Galaxy
EmDrive Breaks Laws Of Physics
Guardians Of The Galaxy Latest Marvel Movie
Ghostly White Shrimp-Like Sea Monster
Gas Explosion In Taiwan
Dawn of the Planet of the Apes, the Amazing Sequel to Rise of the Planet of the Apes

© 2014 all rights reserved
Posted by Unknown