An experimental engine could introduce a new era of space travel — it only had to break a law of physics to do so. An EmDrive uses electricity to generate microwaves, which then bounce around in a closed space and generate thrust. The drive does not need propellant, an important part of current space-travel mechanics. 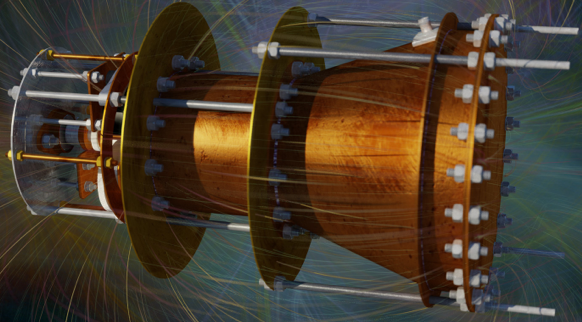 The force generated by the drive is not particularly strong, but the implications are big. Multiple independent experiments have now replicated the drive's ability to generate thrust, albeit with varying success. Using panels to convert solar energy into electricity and then into thrust, opens the door to perpetual space travel fueled by the stars.

Scientists were slow to warm up to the EmDrive since it violates the law of the conservation of momentum. In addition to not being sure why it works — current theories rely on quantum mechanics — scientists also have some pretty good ideas why it shouldn't work.

The law of the conservation of momentum is pretty important. It says that you can't create or destroy momentum. The momentum of two objects that collide is equal before and after the impact. Space travel relies on this principle. A typical rocket engine or thruster uses propellant that it blasts out to create an opposing force.

The Emdrive appears to have found a loophole. It is, in some sense, creating an unbalanced equation of momentum.

The engine's inventor, Roger Shawyer, and his company, SPR Ltd., have been working on this for more than a decade with little fanfare. Shawyer's science had been roundly criticized, although no one seemed to be able to prove that it didn't work.

Slowly, the scientific community has come around. Last year, Chinese scientists replicated it. Now, NASA has done it, too, with the help of U.S. scientist Guido Fetta, who has built his own thruster similar to the Emdrive. A new paper on an eight-day test completed in August 2013 describes the dynamic as "a force that is not attributable to any classical electromagnetic phenomenon, and therefore is potentially demonstrating an interaction with the quantum vacuum virtual plasma." More tests are planned.

Potential applications of the technology vary, from replacing propellant thrusters on satellites, thereby reducing the cost and difficulty of operating, to providing sustainable thrust on deep space missions, resulting in a trip to Mars taking just "weeks rather than months," according to Wired.