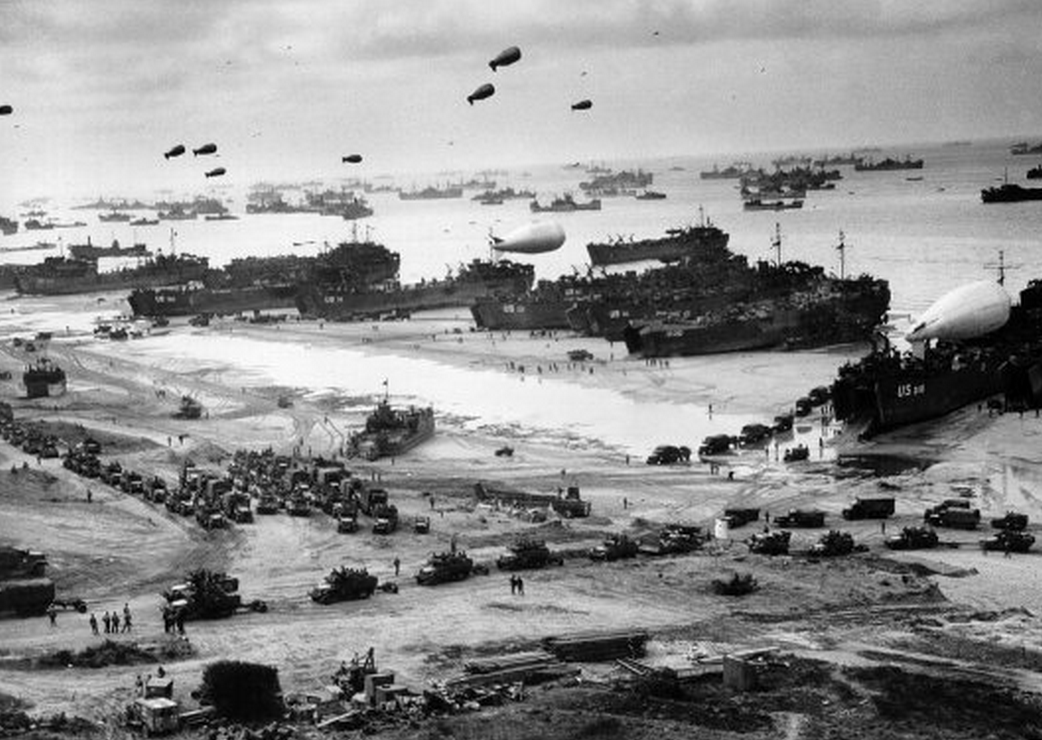 WASHINGTON (Army News Service, June 6, 2014) -- Staff Sgt. Arthur Guest played a unique but crucial role in securing the beachhead from enemy aircraft during the D-Day invasion at Normandy, France, June 6, 1944 and the days and months that followed.

To do that, he and the two Soldiers he commanded launched a helium balloon.

While helium balloons today are popular at birthday parties, Guest's balloon was no small party balloon.

The purpose of the balloon, he said, was to stop German aircraft from swooping in low and strafing the men and supplies on the beach, as they prepared to move inland.

While a balloon might seem fairly innocuous, if an aircraft ever hit the cable holding it up, it would shear the wing off, he said.

One of his men also manned an antiaircraft gun for good measure, he said, and it was used, especially at night when enemy aircraft flew just above the balloons, which hovered at about 2,000 feet.

With balloons like his all up and down the coast, this made enemy aircraft attacks significantly less effective as they had to drop their payload from a much higher altitude and could not get the accuracy they needed had they been able to come in low.

One of the most dangerous moments of the war, the 93-year-old veteran recalled, was during the landings at Omaha Beach when they had to wade ashore with their heavy packs and hold their rifles over their heads, hoping they wouldn't drown.

The heavily-laden, flat-bottom landing craft couldn't make it all the way to the beach since they bottomed out, he explained.

Fortunately, he said, they landed a few hours after the initial landings. By that time, the Soldiers had pushed the German defenders back far enough to where the landings were relatively unopposed.

Before they got the balloon filled with helium, they had to secure the cable to the ground with stakes so it wouldn't take off. For good measure, they added explosive charges to the balloon so that it would blow up an aircraft even if the cable didn't shear a wing. A winch was used to lower and raise the balloon during stormy weather.

He said the entire balloon system was pretty "peculiar."

Guest and his two-man team remained on the beach until November 1944, when he said President Eisenhower ordered them home and declared the mission a success.

If Guest's balloon system was pretty peculiar, so was his unit.

The 320th Very Low Altitude Barrage Balloon Battalion was made up entirely of African-American Soldiers, except for the commander.

It distinguished itself as the first all-African American unit to take part in the invasion of France.

The military at the time was still segregated, as was Guest's hometown of Charleston, S.C., where he grew up.

But despite living under those conditions, Guest said that on Dec. 7, 1941, when he heard Pearl Harbor had been attacked on the radio, he felt it was an attack on all Americans, irrespective of race or anything else.

"I remember real well when they did that dirty trick," he said of the attack. At the time, Guest was a laborer in the Charleston Navy Yard, and he knew immediately on that Sunday that his world had changed forever.

In 1942, Guest was drafted within days of the attack and shipped to Camp Tyson, Tenn., where he learned the balloon trade. He arrived in January and recalled it being bitterly cold.

Once his training was completed, he and others of the 320th were shipped to England, where they remained from November 1943 to June 1944, right before the landings.

The Army kept them busy cleaning weapons and doing physical training. There was very little time for liberty, but the few times there were, Guest said the English treated him and his fellow Soldiers "hospitably."

But the busy work was getting on their nerves and the men were actually looking forward to D-Day, he recalled.

As to the landings and the aftermath, Guest said there was no room for fear. He had a job to do and men to look after and there was no place for those kinds of feelings.

Not until Guest returned to the States in November 1944, did the fear finally hit him.

"You wonder how you went through it," he said. It was like waking up after a nightmare and realizing, "Lord, it really happened."

Although Guest kept his emotions under control during the war, there was one he could not; his love for Marthena, his fiancé.

"I kept her picture close to my heart at all times and while in the foxholes," he said.

Upon his return stateside, Guest said the 320th did jungle training, in preparation for the invasion of mainland Japan, which fortunately never happened, he said.

The year 1945 was a good year, he said. The war was over and that's the year he married Marthena.