The history of New York begins around 10,000 BC, when the first Native Americans arrived. By 1100 AD, New York's main tribes, the Iroquoian and Algonquian cultures, had developed.

European discovery of New York was led by the French in 1524 and the first land claim came in 1609 by the Dutch.

As part of New Netherland, the colony was important in the fur trade and eventually became an agricultural resource thanks to the patroon system. 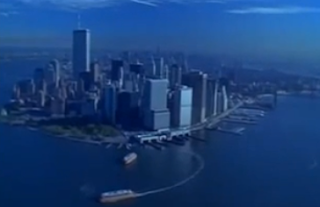 In 1626 the Dutch bought the island of Manhattan from Native Americans. In 1664, England renamed the colony New York, after the Duke of York.

New York City gained prominence in the 18th century as a major trading port in the Thirteen Colonies.

New York played a pivotal role during the Revolutionary War. The Battle of Saratoga was the turning point of the war. New York's constitution was adopted in 1777, and strongly influenced the United States Constitution.

New York City was the national capital at various times between 1785 and 1790, and Albany became the permanent state capital in 1797. In 1787, New York became the eleventh state admitted to the Union.

New York hosted significant transportation advancements in the 19th century, including the first steamboat line in 1807, the Erie Canal in 1825, and America's first regularly scheduled rail service in 1831. These advancements led to the expanded settlement of western New York.

Far from any of its battles, New York sent the most men and money to support the Civil War. Thereafter, the state helped create the industrial age and consequently was home to some of the first labor unions.

During the 19th century, New York City became the main entry point for European immigrants to the United States. Millions came through Castle Clinton in Battery Park before Ellis Island opened in 1892 to welcome millions more. The Statue of Liberty opened in 1886 and became a symbol of hope. New York boomed during the Roaring Twenties, before the Wall Street Crash of 1929. New York City hosted the tallest building in the world from 1913–74.

World War II turned around the state's economy, as hundreds of thousands worked to defeat the Axis powers. Following the war, the state experienced significant suburbanization, and most cities shrank. The Thruway system opened in 1956, signalling another era of transportation advances.

Following a period of near–bankruptcy, New York City renewed its stature as a cultural center, attracted more immigration, and hosted the development of new music styles. The City became a media capital over the second half of the 20th century, hosting most national news channels and broadcasts, as well as globally–renowned national newspapers. The state's manufacturing base eroded over the period, as the state transitioned into service industries.

Vu New York: Is a publishing platform design to share information for this area of the country. Vu Studios is a Content Video Production Company That Specializes In: